Pärnu is home for many people who have moved here from abroad. Their stories, why they chose Pärnu as their next home, are different and very interesting. These stories give a good opportunity to look at Pärnu from a different angle.

Before Pärnu you lived 10 years in New York and then decided to move here. Why?

When meeting my husband, who was born in Pärnu but grew up mostly in Germany, we both agreed we would not get old in New York City and wanted to move back to Europe at some point. When we started considering our options more seriously in 2017, London (where I lived for 5 years prior to New York) was already out of the picture with the whole Brexit, I personally did not want to move back to France and my husband did not want to move back to Germany. The reason being, we had both built our careers in English-speaking environments and we were not sure we would be able to fit in the working culture of our home countries (and our home culture in general as we had both been gone for so long).

We were also considering starting a family so we wanted a place that was safe, affordable and kids friendly. We had come to Pärnu a few times over a few summers and thought it corresponded to all our requirements so we arranged our work life to be done online, bought a house over a 2-week holiday period, packed everything and moved in November 2019.

Do you remember your first impressions when you arrived?

The first time we visited Estonia was in June 2015, shortly after we got married. I had never been that far east in Europe and to be honest, I had no preconceptions nor expectations. I was going to discover the country where my husband was born so I cannot say I had planned and prepared my visit – I was rather happy to go with the flow. So, my first impressions were extremely positive.

Tallinn is just an incredibly interesting city, architecturally and historically. The people were all very friendly and spoke excellent English, the food was very good and Pärnu itself was (and still is) such a pleasant city. It reminded me a bit of the place I was born in myself: with a river, a beach, the marshlands nearby – but all with what was missing in France: less crowded overall, touristy but not too much, a very nicely kept natural landscape (no big noisy road right at the beach for instance, feature that is all way too common in France in my opinion) and also nice hiking trails to walk or go on a bicycle in and outside the city.

From a big city to a smaller town, outside of family reasons, what other advantages do you see in living in a smaller place?

Pärnu is a city at a human scale and going from one end of the city to the other is not a 3-hour long business and after living in New York, living in any European city would have felt like downsizing anyways. Another thought is that New York (same as London or Paris for that matter) is a city where you have to pay a premium to live in and at the end of the week, your job has often been so demanding to make that money that you are too tired to really take advantage of what the city has to offer (at least for me, after I have gone over the 35-year-old mark).

The offering is also overwhelmingly large and pricey so picking a show to go to demands a good amount of research and is a decision in itself. After 10 years, I ended up going to the opera maybe once a year (while I really enjoy the opera) as a ticket was USD200 per person for a decent spot in the opera house and a 1.5-hour subway ride from where I lived. Pärnu has obviously a smaller offering but the advantage of that is that you do not need to browse countless websites to know what goes on and it is also very affordable.

We also have the option of those combined tickets to go to Tallinn, which extends the offering a bit and makes it rather appealing. The scale of Estonia itself, for a former New Yorker is fine as driving 2 hours to go somewhere is after all not that big of a deal (a lot of New Yorkers do commute for 4 hours every day!). Lastly, the quietness. I live in Rannarajoon which is very central and yet can now sleep without ever hearing the sound of the firefighters’s siren and this is true luxury. 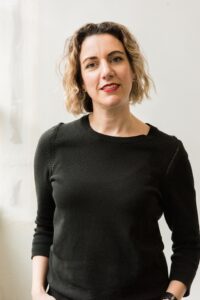 What work do you do? How hard was to find work here?

I am an interior designer and continued to work for an online company based in the US for the first year and half. I also had the chance to partner with an Estonian company called Occo to create designs for their clients which was great. After a very competitive environment in New York (there are a lot of very talented designers out there), it is also nice to arrive in a country where collaborating with other designers is a real possibility. Then I had a baby last summer and I am now getting back to work slowly, trying to get Estonian clients. It is not particularly easy but I am in no rush.

Are all your clients here in Estonia or you still give advice people who live abroad?

A healthy mix of both:  some of my US clients are still contacting me to get my help from time to time – which is great and I try to get clients here in Estonia.

Have you travelled around Pärnu County? If yes, what are your favorite places that you recommend to visit?

I have traveled through Pärnu County a bit and love showing it to visitors. I very much like the marshlands as it is very similar to where I come from – Soomaa park in particular. I also love Kihnu island.

What can you say to people who have recently moved here from abroad? What are maybe the first things to do or mistakes to avoid when settling in?

While you can totally live in Estonian speaking only English, make the effort to learn the language as Estonians do appreciate it when you try but do not rush it: it is a VERY hard language so do not pressure yourself into learning it in 6 months as you will set yourself up for disappointment. The government has excellent linguistic programs for free so just enjoy the ride.

Otherwise, the administrative aspect of settling in Estonia is often surprisingly fast but communication is also surprisingly sparse so if you do not hear from someone, it often means everything is just fine and will happen in due course, often earlier than you would expect so just relax. 🙂

Read more about Aurélie’s work from her webpage.

I love to visit RMK hiking tracks. There are so many beautiful places

Pärnu is an amazing place. Give it some time, and soon you will call it your home.

Manager of recruitment company and coach

Pärnu is the best place for absolutely everything

You can develop your business anywhere, not only in the big cities. Just try to find your individuality!

One must engage in delightful activities with delightful people and luckily they can be found in Pärnu!

Those who have a job and a home in Pärnu County are very happy here.

For me, Pärnu County has always been home. Other places did not even come to mind

Pärnu County is totally my place under the sun!

Big ideas are born in peace and silence without too much haste.

There is plenty of space for everything in Pärnu County: just live, work, enjoy, love, create and flourish!

Pärnu County is a great place for people who love variety.